This uncontrolled roundabout is situated at the current end of Cycle Superhighway 8. TfL consulted the public on changes to it in 2012. The proposals involved cyclists and pedestrians sharing space around the edge. For that reason the scheme attracted adverse criticism from both cyclists and pedestrians. A cyclist was killed here in 2015. 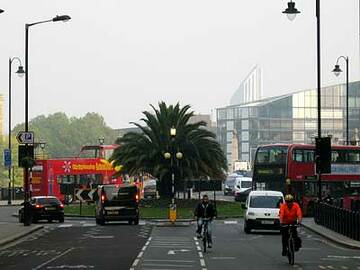